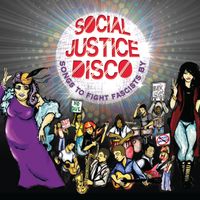 From the recording Songs to Fight Fascists By!

They the ones who all be lying, from their tongues to our ears.
Don’t let them build a kingdom based on ignorance and fear.

They raise up all the masses who refuse to try to think.
Pass around their poison people line up and they drink.

They're the men in the mirrors and they're shoutin' at themselves.
Screaming at the murder they been stacking on the shelves.

Selling hate for Christmas and burning crosses cross the land.
I promise you I know the Gods and this is not their plan

Big man yelling loud, you put on the yellow star
He will shoot you if he sees you, he won't let you get far

The yellow star of yesterday is Trump's gold crescent of today.
Branding all the Muslims and the Mexicans that’s not the way

Forget them who were here first that we’re all refugees.
But didn't even your Jesus say love thy neighbor's the way to be?

It seems to me that Jesus might be sad at what we do.
But don't ask me I'm just another short fat tattooed Jew.

But I know that keep them out, lock them up, and get my gun,
it's a call to war and a call to hate and a prayer to the wrong one.

Cuz I feel that fourth Reich is rising, rising faster than we can see,
all the hatred and all the lies and there's no where left to flee.

Could be a 4th Reich a-comin' and we must not let come too near.
We cannot let them build a kingdom based on lies and built upon fear.

We must not let them build up all the hate,
and feast on fear....